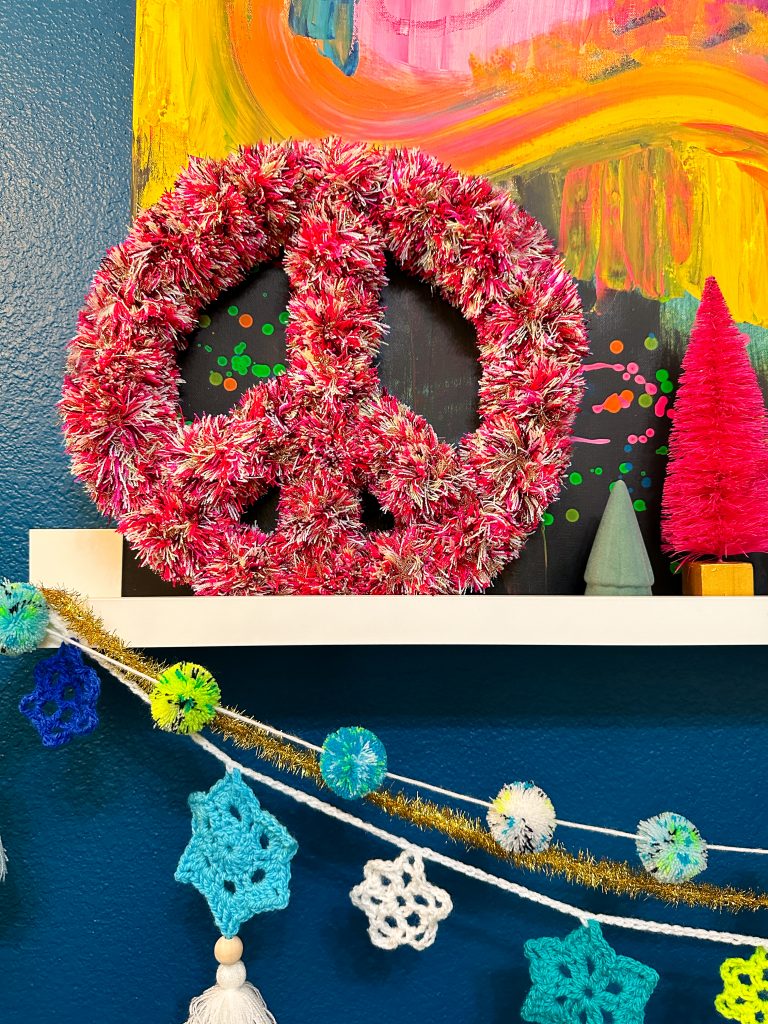 SEE YA PUMPKINS, COZY CRAFT SEASON IS UPON US! No matter if you’re team “holidays start on November 1st” OR “holidays start on December 1st,” the real crafters know that the holiday projects start early (because there’s so much to make and/or gift)!

One of the ✨ holiday projects ✨ we are giddy to share with you from our Holiday Craft Shop is the DIY Peace Sign Pom Pom Wreath! An updated take on one of TNTP’s very first holiday craft tutorials, it’s an easy weekend craft project that will bring some cozy texture to your holiday decor year after year!

This wreath can be made in two different styles — “shaggy” poms (the red/pink/gold version) or “traditional” poms (the blue/yellow/silver version). 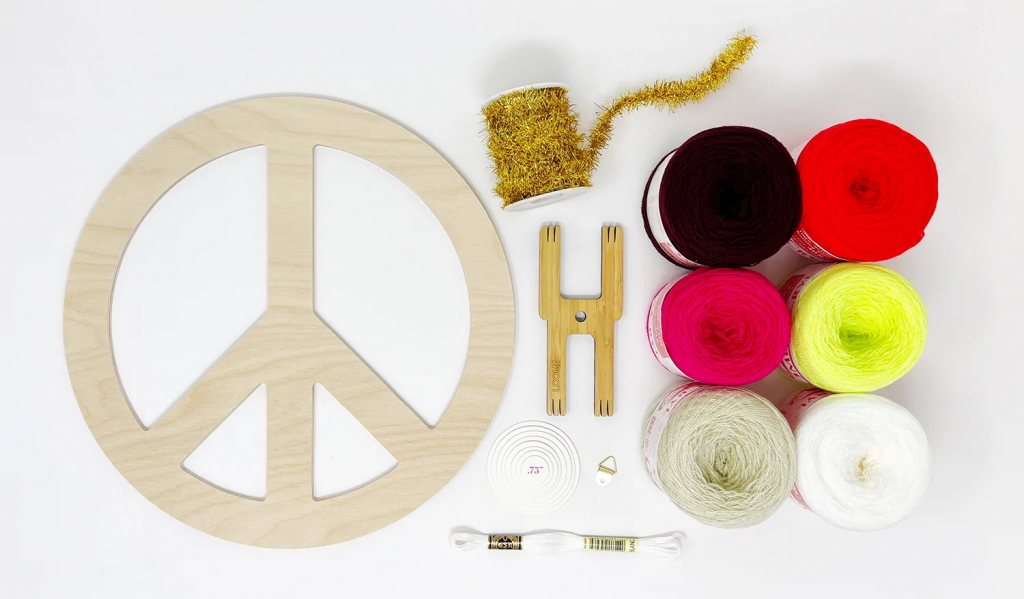 TO MAKE POMS FOR THE SHAGGY WREATH: 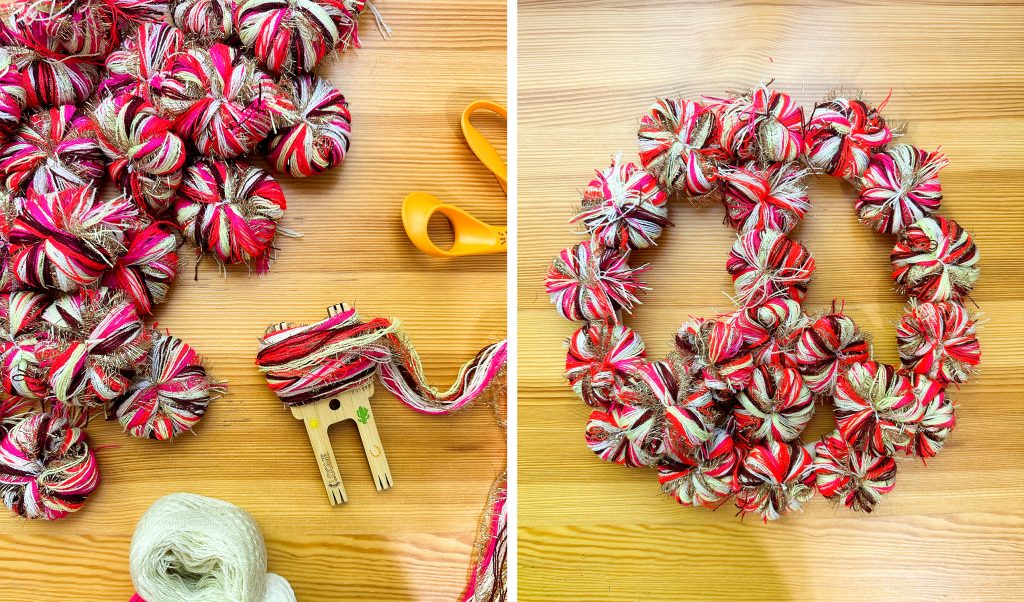 To completely cover your wooden peace sign frame, you will need to make at least 28 2-inch pom poms for a shaggy wreath.

TO MAKE POMS FOR THE TRADITIONAL WREATH: 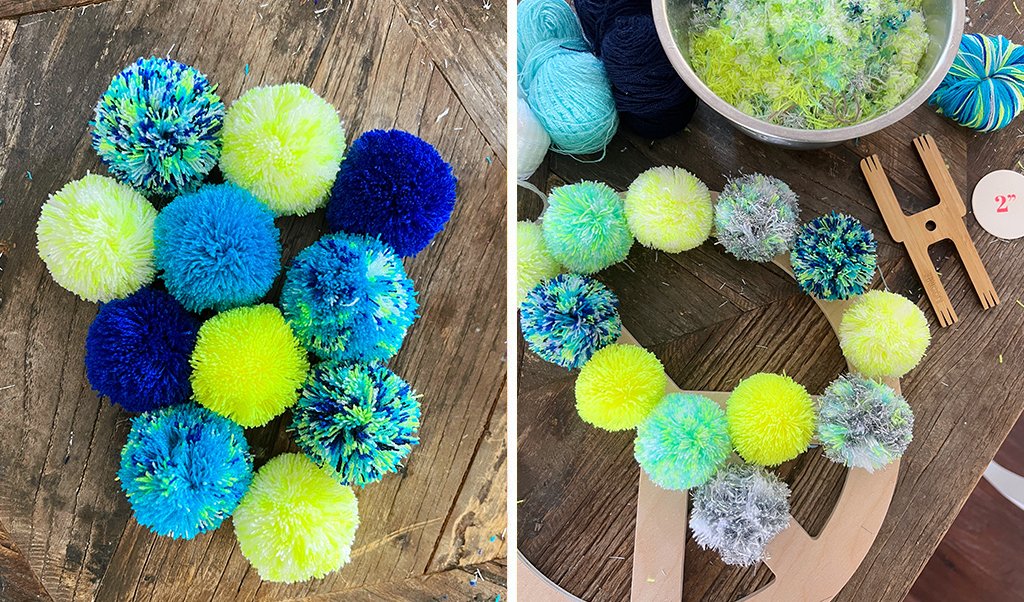 For a “traditional” pom pom peace wreath, you’ll need to make 22 2-inch pom poms. This quantity and size will ensure your peace frame is totally covered while leaving enough space in the two bottom gaps to really let that peace sign shape shine!

NOTE: If you leave the frame bare, you will see a slight peek of the frame in certain spots. If that bothers you, you can always wrap yarn around the frame first.

The pom pom colors and patterns you choose are totally up to you! In this sample, the pom poms are all different colors and include a mix of solid and patterned pom poms. All colors are from the Hanukkah colorway of the Peace Sign Pom Pom Wreath Kit and the two pom pom patterns used are sprinkle and speckle, which you can learn to make here!

As with the shaggy wreath, to make this process go a bit faster we recommend making all of your pom pom “pancakes” before cutting them open. 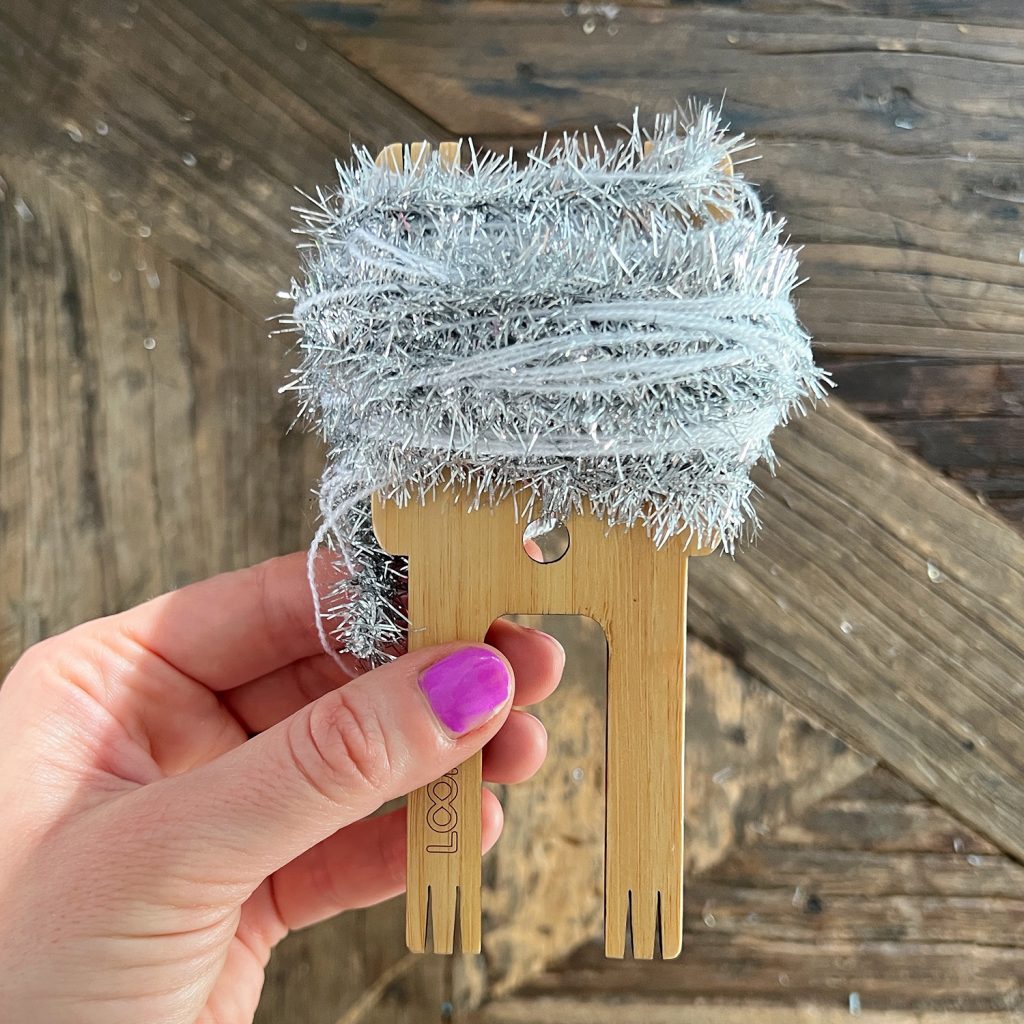 When making tinsel pom poms, you can either make solid tinsel poms or mixed tinsel and yarn poms. If you’re using a spool of tinsel from a Peace Sign Pom Pom Wreath Kit, 1 spool will yield 4-5 2″ tinsel pom poms, so be sure to plan your design accordingly. If you make a solid tinsel pom pom, wrap ~15 times on the large side of your tool. If you mix yarn and tinsel, wrapping them simultaneously (pictured above), wrap ~12 times. 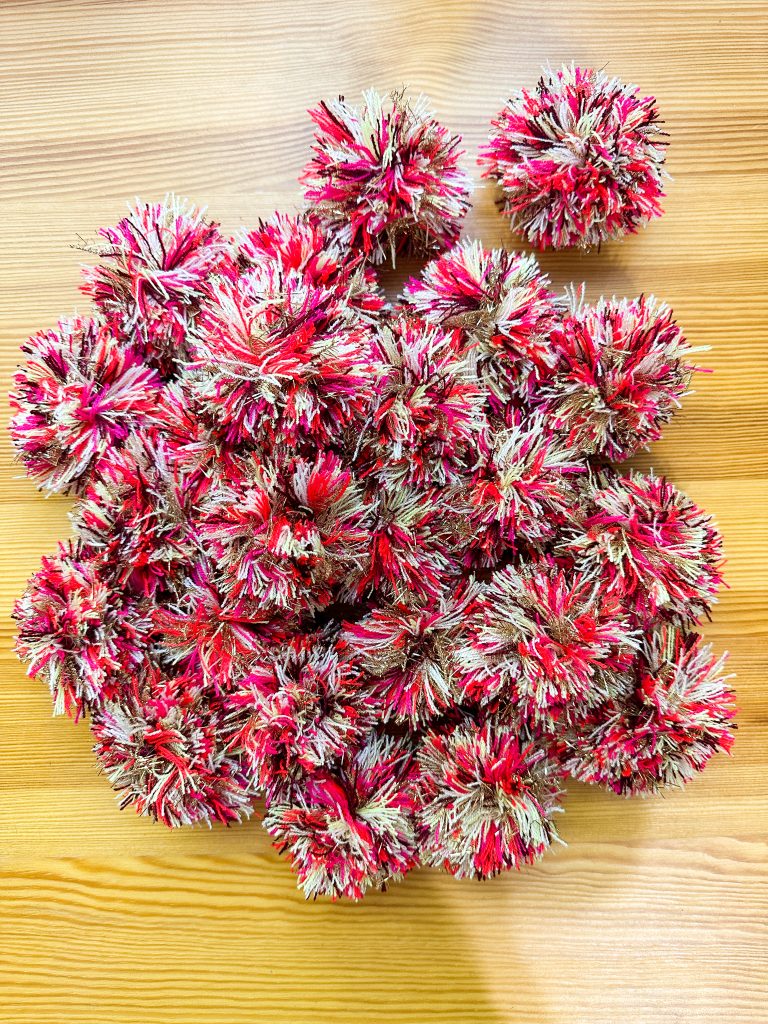 Now the fun part – cut open all of your pom pom pancakes (step 6)!

Once all of your pom poms have been cut open, it’s time to adhere them to your wreath frame.

Whether you’re making the shaggy or traditional version of this wreath, the steps for attaching your pom poms remain the same — start by separating the fibers of a pom pom until you find the center string. It’s important that you’re adhering the pom pom from this center point and not the outer edge of the pom pom, as those strands can be pulled loose over time, and we want you to hang this wreath for years to come!

Place a small dot of hot glue at that center point, and press it firmly into place at the top center of your wreath frame. Continue gluing your pom poms to the wooden frame, working your way around the perimeter and down the center post, until it’s completely filled!

For the “shaggy” style wreath, you may find that you have 1-2 pom poms leftover. If this is the case, hang onto them as you may need them for filling in any gaps after you’re done trimming. 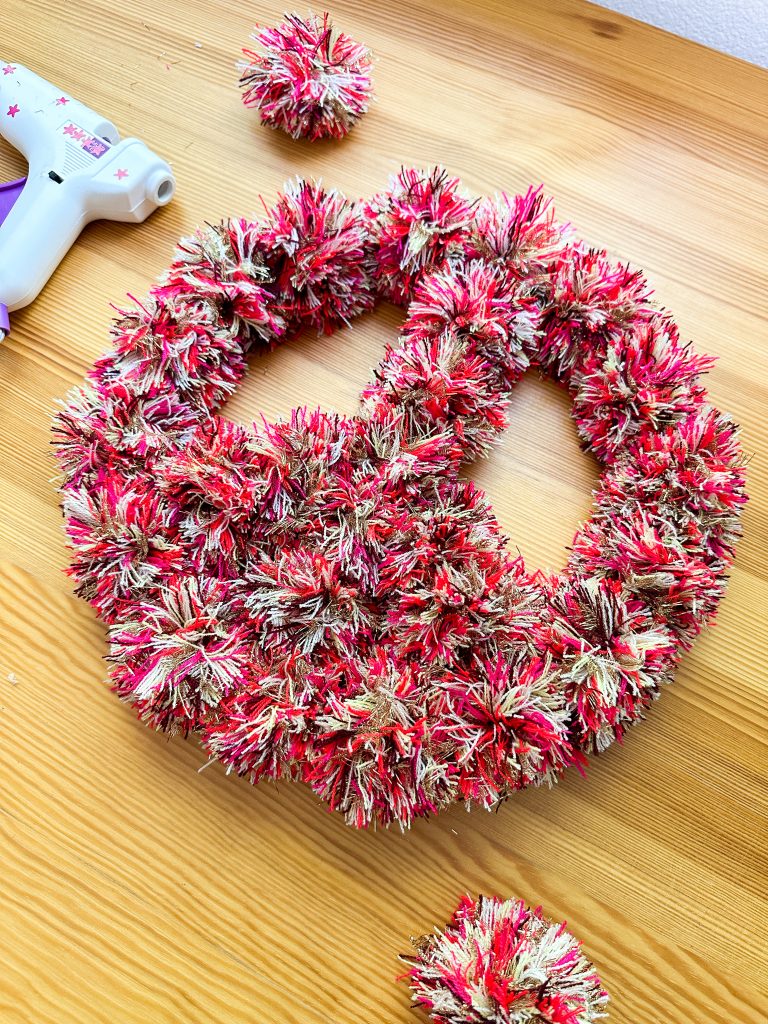 If you’re making the “shaggy” version, it’s now time to give her a little haircut! The goal isn’t to make the edges completely uniform, but instead just to clean up any stragglers on the outer edges, as well as open up the inner gaps a bit. 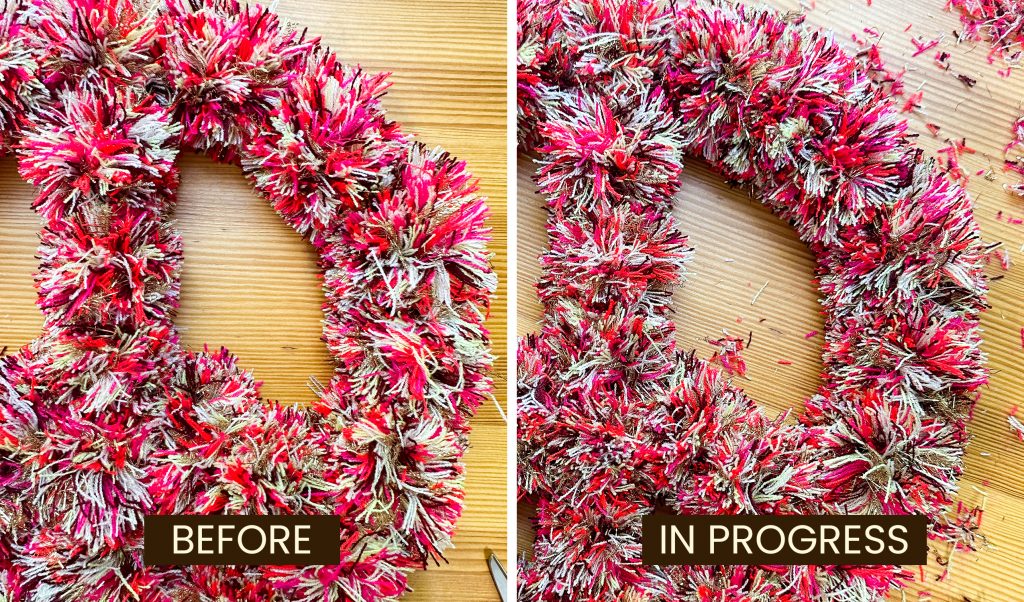 Starting with the insides of the larger gaps, use a sharp pair of scissors to flatten any rounded edges. This is the key to making the wreath feel like one cohesive shaggy piece, rather than lots of separate pom poms.

Throughout the process, run your fingers along the trimmed edges to loosen up any scraps that haven’t yet fallen away, and clear up your surface. This will help prevent any over-trimming! 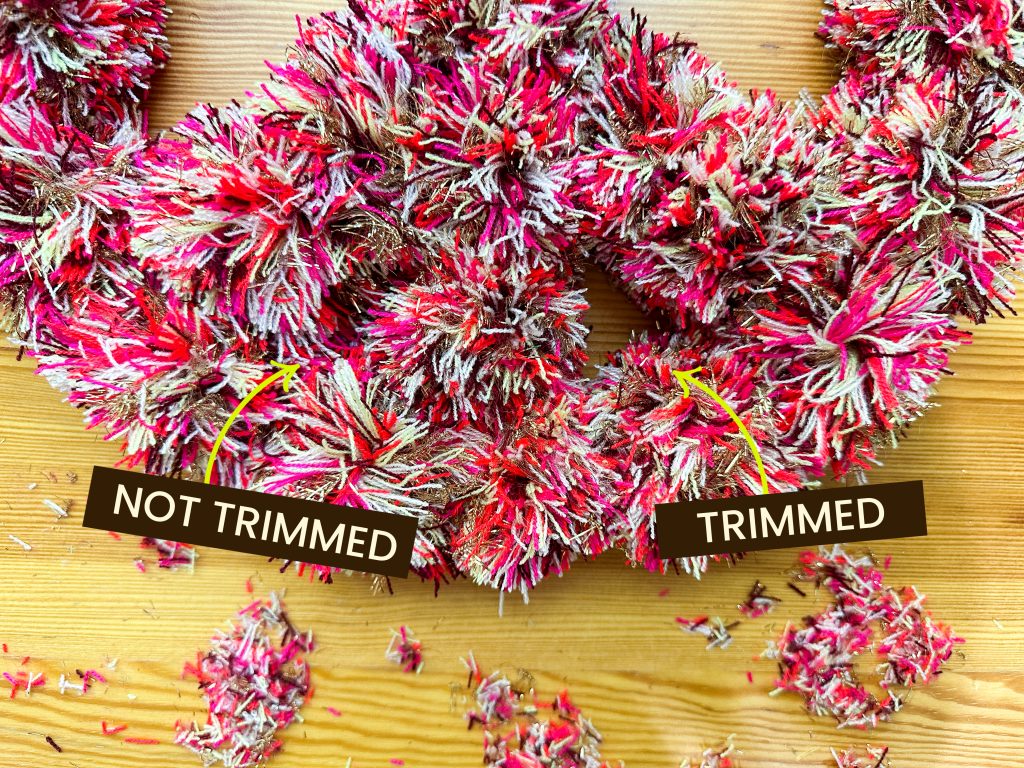 Repeat the same step to the small inner gaps, making sure not to trim too much so as to reveal the wood frame underneath.

For this step, I found it helpful to flip the entire wreath over and trim from the backside as well! Continue to run your fingers along the trimmed edges to loosen up any scraps and clear up your working surface as you go. 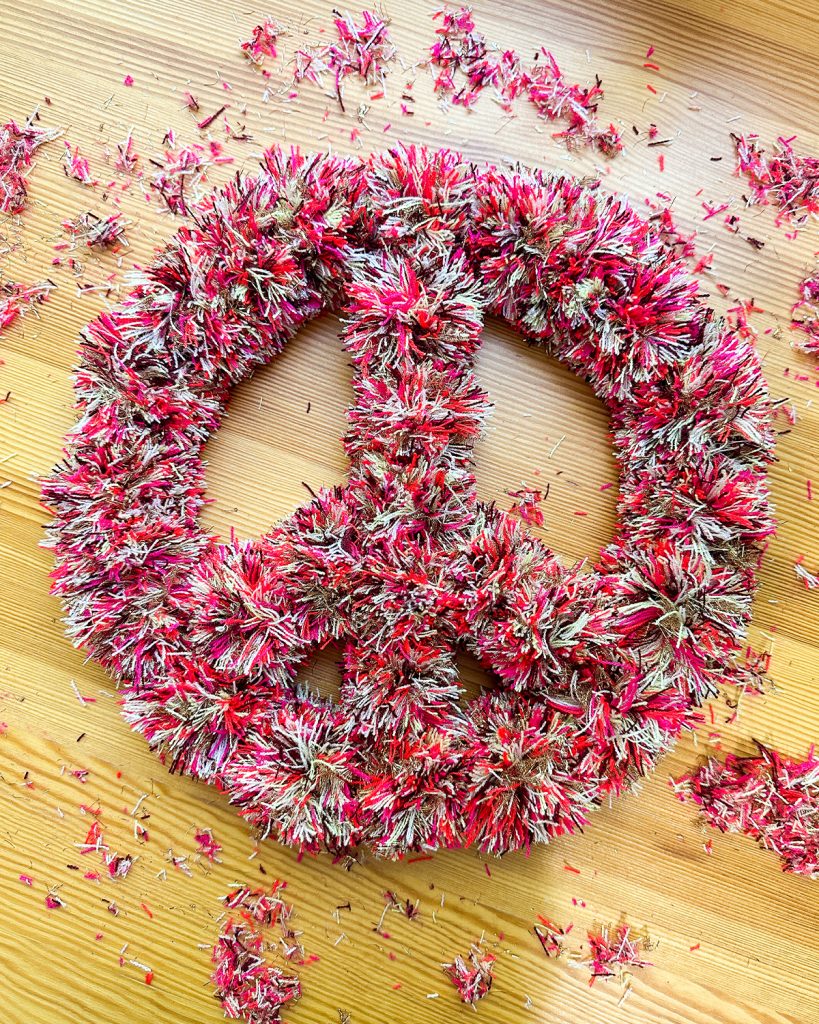 If you find that any areas of your wreath are looking sparse, now’s the time to bring back those extra poms (or make a few more if yours are all used up!) and carefully glue them into the sparse areas, trimming them to be in line with your other poms. If you find that your extra poms are too large for the areas you’re trying to fill, make a new pom or two that are half the revolutions of your other poms, then attach, and trim. 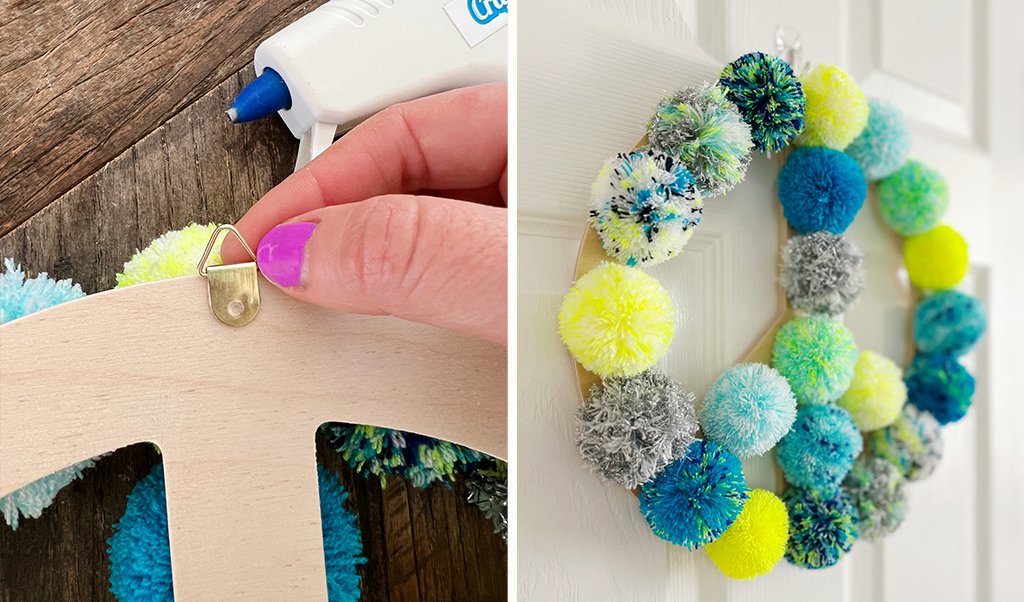 When you’re ready to hang, use the triangle D-Ring included in the kit or a 3M Command strip to hang the wreath on your wall or door! 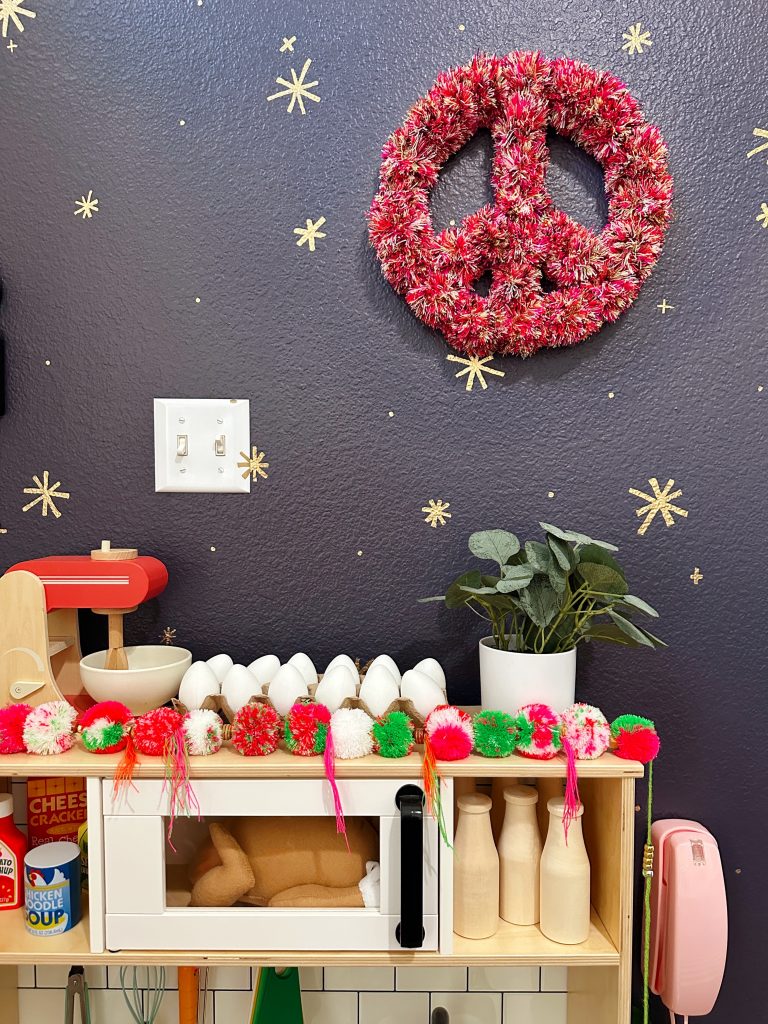 Although this wreath is technically intended to be holiday decor (currently living in my daughter’s play kitchen area), we just might keep this one up year-round!

If you make this project be sure to tag us @theneonteaparty! We can’t wait to see what colors and style you chose! 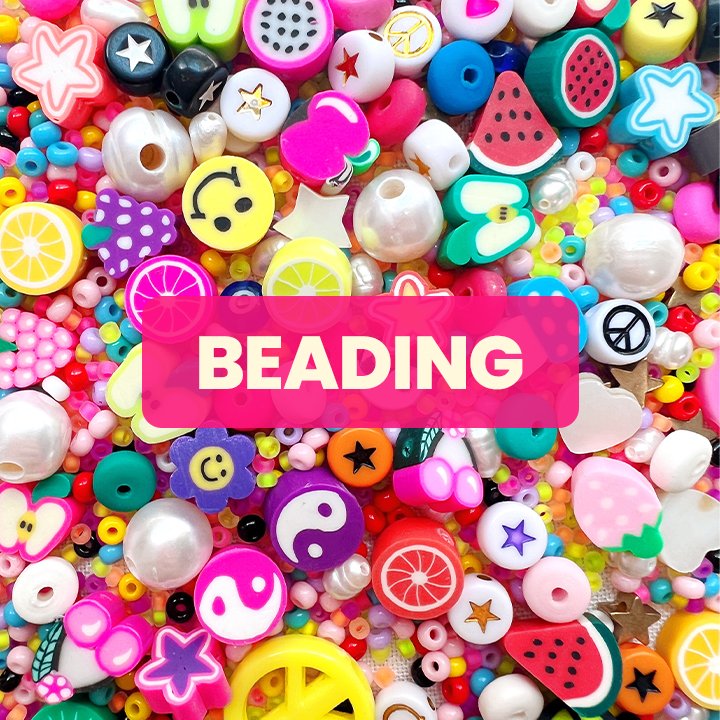 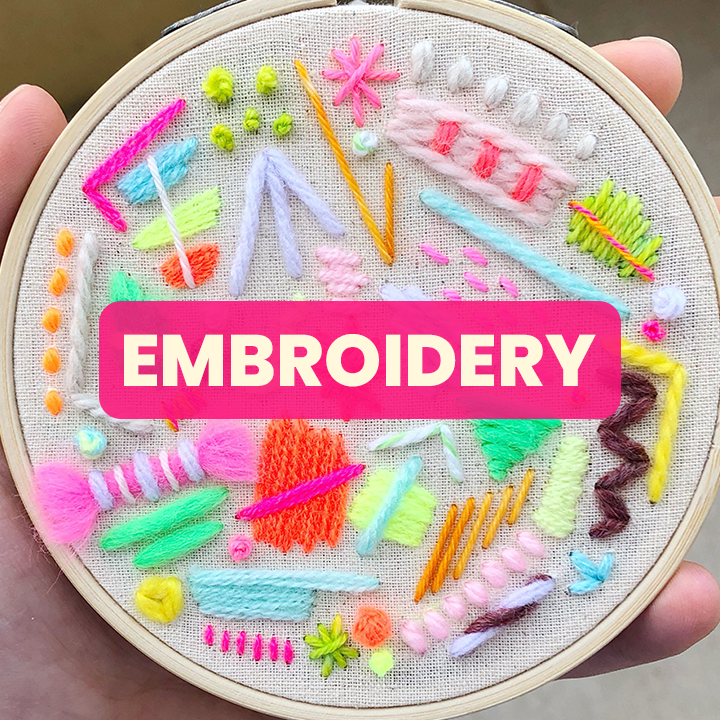 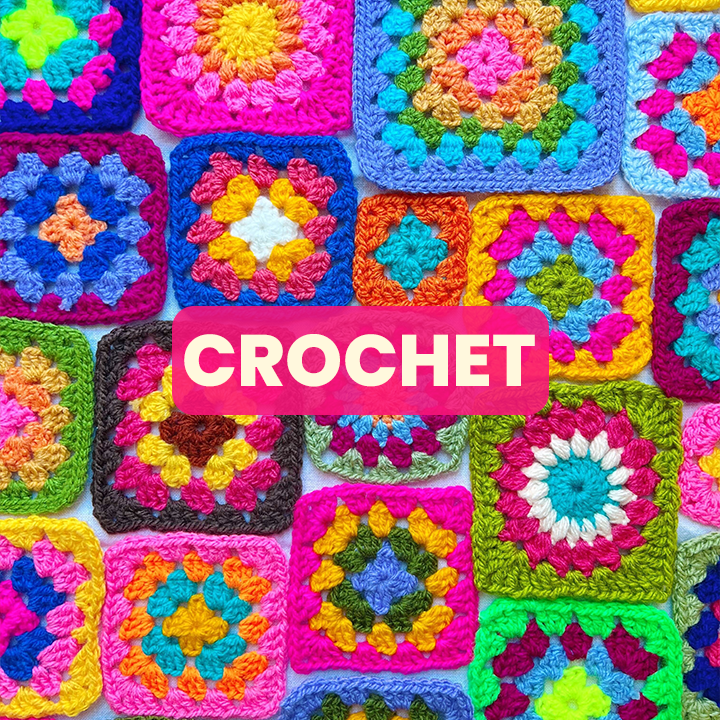 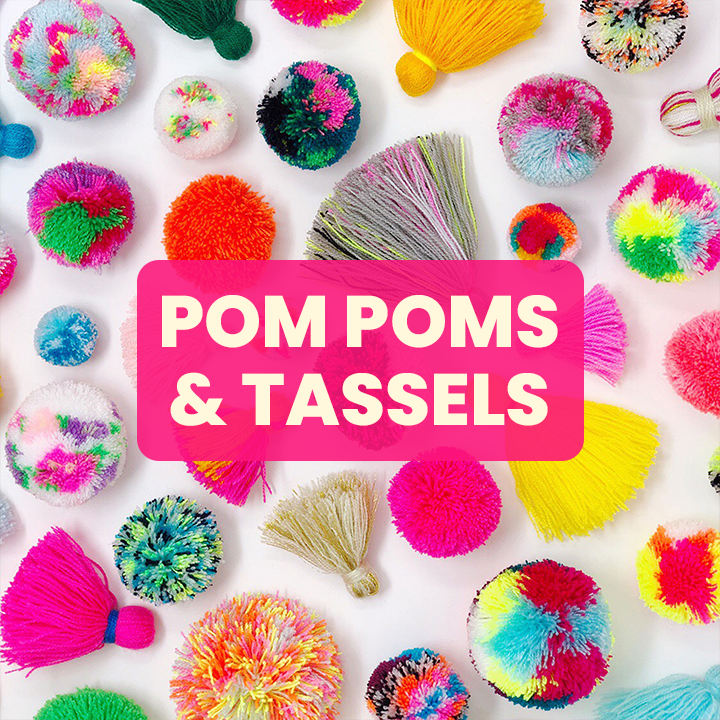 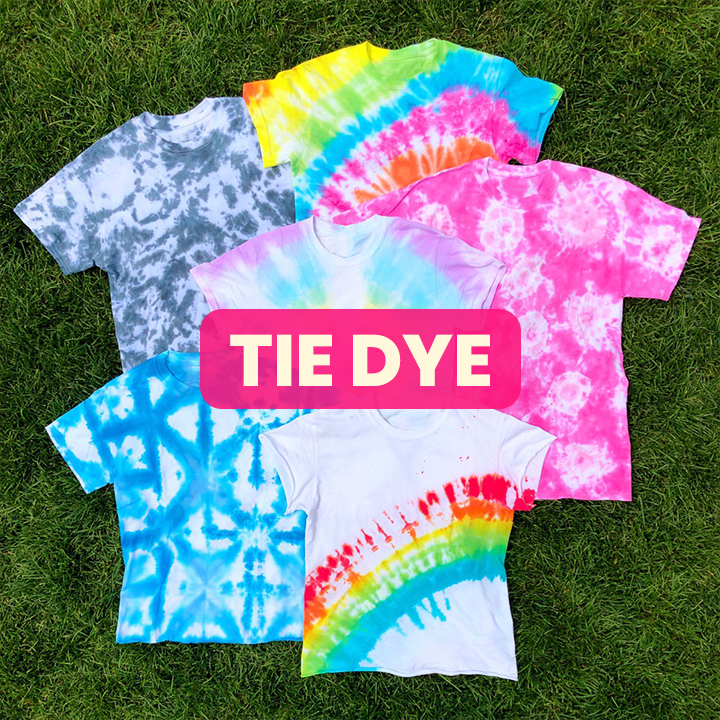 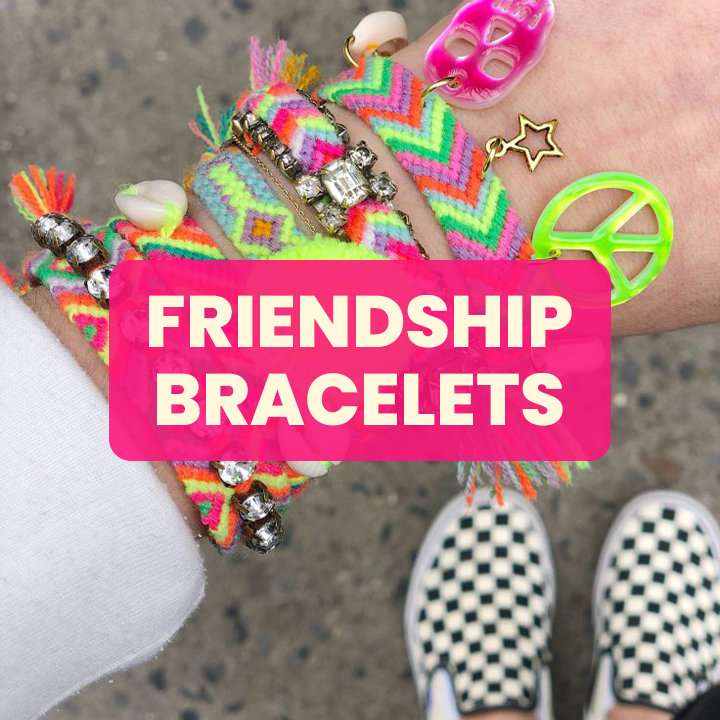